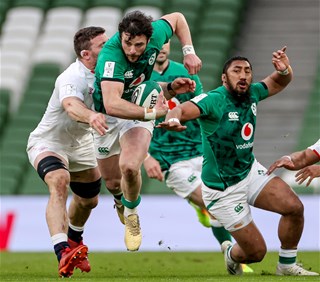 ROBBIE HENSHAW put in a barn-storming Man of the Match performance as Ireland demolished England 32-18 in the final round of this season’s Guinness Six Nations championship played at the Aviva Stadium on Saturday afternoon.

The fancied visitors put Ireland under early pressure and seemed to target Henshaw, who was playing at outside centre on this occasion, with their restarts but they found the Buccaneers clubman defiant and inspirational as he fired up the hosts. His immense contribution, in which he made ten carries (the most of the game), earned the Athlonian a well overdue and richly warranted Man of the Match accolade. 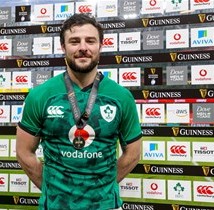 Tadhg Beirne was again magnificent in the pack where C.J.Stander put in another serious shift, dominating the gainline, in his 51st and final outing for his adopted country. The win gave the popular South African an appropriate send off which came despite Bundee Aki somewhat harshly incurring a red card midway through the second half.

On his 99th appearance, a driven Jonathan Sexton continued to roll back the clock as he dictated matters at fly-half as well as being spot on once more with his place-kicking. He scored 22 points with a 100% success rate from his 8 kicks at goal. This brings his international points tally to 925. Another veteran to defy the clock was Keith Earls who again demonstrated his lethal finishing against last season’s World Cup finalists.

Tadhg Furlong, with the benefit now of a few games under his belt, is regaining the form that made him a fearsome front-rower. He will surely be a cert for inclusion, as will Henshaw and Beirne, when the British & Irish Lions squad is named in the near future. Ireland could have a healthy contingent when and wherever the Lions square up to world champions South Africa.

Robbie has been Ireland’s standout performer during this sometimes frustrating Six Nations campaign. Everyone at Buccaneers RFC is justifiably proud of the unassuming Coosan man’s displays. Hopefully he will add another PRO14 title when Leinster square up to fierce rivals Munster in Saturday evening’s final.