During the 1993-1994 season Athlone Rugby Football Club and Ballinasloe Rugby Football Club tested the amalgamation waters by playing as a joint team in Division Three of the All-Ireland League under the cumbersome title of Athlone/Ballinasloe RFC. The following year the relationship was consolidated and formalised and the title Buccaneers R.F.C. came into being.

The name Buccaneers derives from the original Shannon Buccaneers who were founded in the early 1930’s by Athlone man Diarmuid Murtagh. Shannon Buccaneers was a formidable Leinster Rugby Club in their day who fielded players of the calibre of Walter Amos and Sammy Walker, a British and Irish Lion. Despite winning a pair of Towns Cups in this period, Murtagh’s dream of building a strong midlands based rugby club were, however, brought to a sudden halt by the onset of the Second World War which effectively ended the short life of Shannon Buccaneers.

In October, 1951, rugby was revived in Athlone with the formation of Athlone Rugby Football Club following a meeting chaired by Dr. Jim Keane in the Crescent Ballroom, attended by 37 persons. “The Doc” became the club’s first President while Michael O’Meara was Captain. Various pitches were utilised until the club purchased its own grounds on the Ballymahon Road at Cornamagh where a clubhouse was opened in 1965. Title of this ground was transferred to the IRFU from whom the club rented it back at the princely sum of £1 per annum. A decade later it was named Keane Park in honour of Dr. Keane, who died shortly after taking up office as President of the IRFU in 1975. A converted Bord Na Mona prefab provided the original facility there with dressing-rooms, members bar and in 1976 squash courts being added over the years. With road widening taking away part of the main pitch, the club purchased the current site in the mid 1980’s where three pitches were provided over a period of time with covered terracing erected in 1996. (Croughan’s Supervalu is now on the site that was Keane Park.) 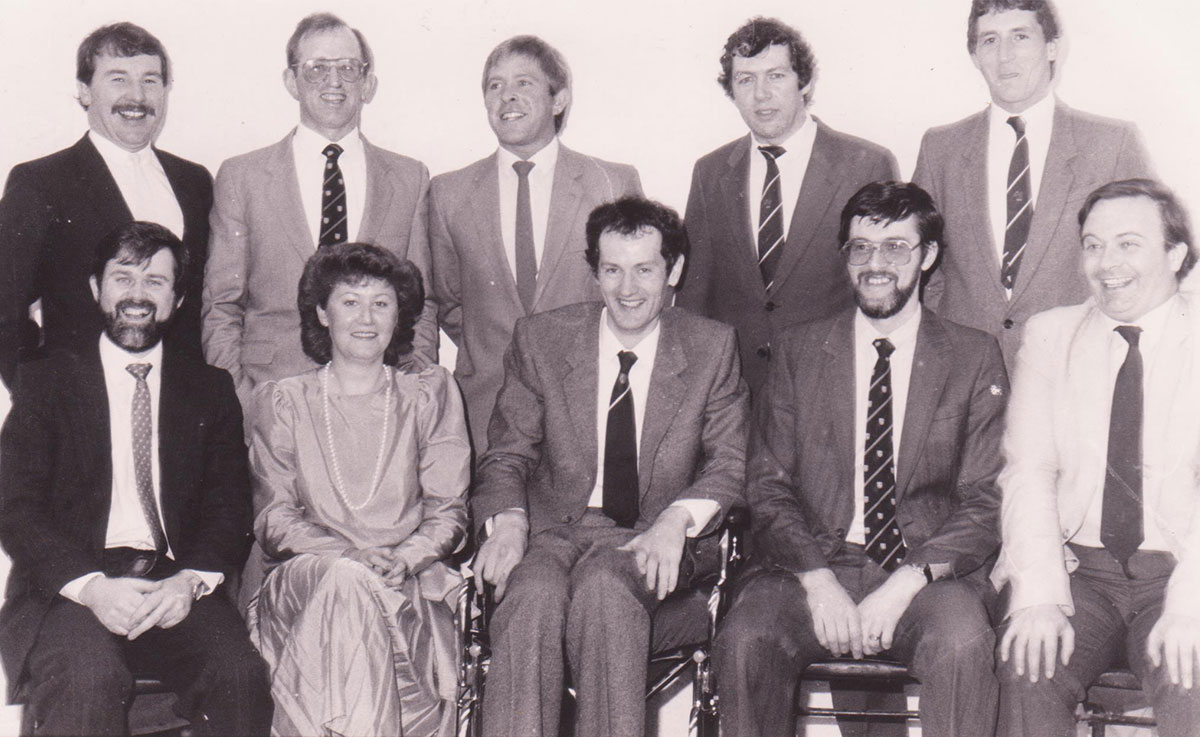 Leo Galvin, who was later to be instrumental in the alliance with Ballinasloe RFC, was the first Athlone clubman to play Senior rugby for Ireland in an international against Argentina in 1973. Athlone played in Division 2 of the inaugural All-Ireland League when Tommy Conlon scored the first ever try by any player on the opening day of that then new competition. Other notable personalities and players over the decades included Paddy Kilcommons (RIP), Ray McLoughlin, Dermot Fitzpatrick (who nurtured the youth for nigh on 50 years), Paddy Grogan (RIP), Gerry McNamara, David Henshaw, Patrick Cooney, P.J.Dwyer, Kevin Canavan and Big Pat Hynes.

The success the Club has enjoyed would have been difficult to envisage during the initial 1993/94 Season which was a sharp wake-up call. The Pirates were lucky to escape relegation to Division Four. The following season Buccaneers began to acclimatise themselves with the realities of the competition finishing in mid-table, an achievement which was helped greatly by the return to his native heath of former Ireland No.8 Noel Mannion from Ballinasloe.

The following season, 1995/96 witnessed the arrival of the Rigney brothers, Brian and Des, from Portlaoise while Donal was already playing with Buccaneers. Coached by Kenny Tarrant and captained by Mike Devine, Buccaneers scorched through Division Three winning the title outright, They were undefeated in the process, culminating with a fine away victory at Portadown. The final whistle in that game also marked the first pitch invasion by their supporters who later evolved into the Pirates Supporters Club. It is these legendary followers who first sang “The Fields of Athenry” (most memorably in Dungannon in 1998), the Pete St. John song that has been taken up far and wide since. 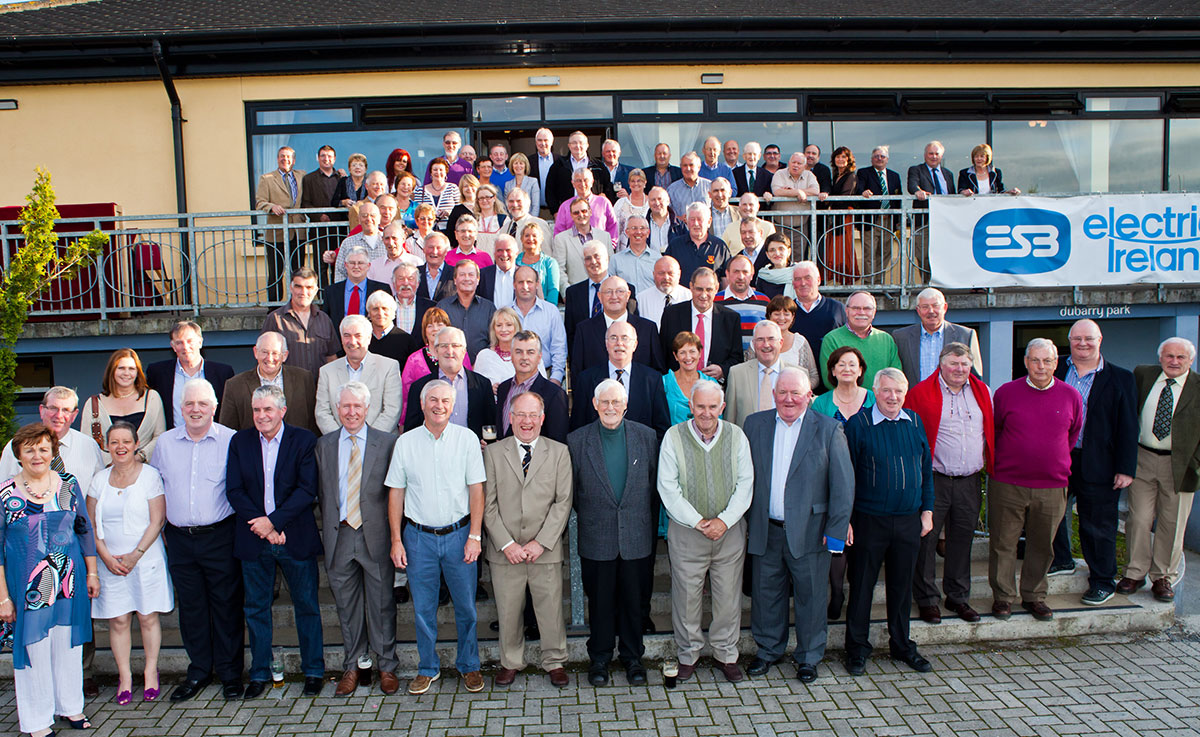 The 1997/98 season heralded the arrival in the club of one the best tactical coaches in the northern hemisphere, Eddie O’Sullivan. The onslaught that had begun in Division Three continued in Division Two. That season saw them lose just one league game and they qualified for a two-leg home and away promotion battle with Dungannon. Buccaneers lost the first leg (their first home setback in a number of seasons) by 17-7. But the away game proved to be one of the biggest upsets in Irish club rugby history with the home side going down by 27-10 leaving Buccs the outright victors with an aggregate score of 34-27. It was a defining moment in the short history of the club and one which propelled them into Division 1.

In their first year in Division 1 Buccaneers neglected to read the rugby writers’ scripts which made them hot favourites for one of the two relegation spots. The 98/99 season was a remarkable joyful journey for the team, the club and the supporters. Train loads of supporters to their matches were a regular occurrence in those days when club rugby was king. The big names came and fell on the playing fields of the now named Ericsson Park, Athlone, and Moher Road, Ballinasloe, and a number of away victories helped them into a third place finish in the League and a play-off spot away to Cork Constitution which they narrowly failed to win. The remarkable 3-2-1 run had come to an end.

The 1999/2000 season saw the Ireland come calling for Eddie O’Sullivan to join Ireland Senior squad coaching team and Brian Rigney took over as Director of Rugby. John McKee succeeded the former Ireland international and guided the midlanders to two Top Four finishes in three seasons. Geoff Moylan then took up the mantle of Senior Coach for two seasons in 2005/6 but Buccs struggled in his first season at the helm and were relegated to Division Two after the following campaign.

An “in-house” duo Tony Dolan and Jude Lennon were then appointed coaches and in their two seasons in charge guided Buccaneers as they claimed the Division 2 title on the final day of a memorable 2007/8 campaign to regain their Division One status. But the Athlone club dropped straight back to 1B and Neil Culleton came in as coach for 2009/10 with South African Hendrik Marnitz taking over the reins in 2010/11 for two seasons and Tony Dolan returned to the helm for a second stint in charge. Brett Wilkinson was appointed head coach in 2015 and helmed the Pirates, captained by Kolo Kiripati, back to Division 1A in his second year. This success saw him lured to Hong Kong and he was replaced at the midlanders by his assistant and fellow Springbok Darin Claasen. However, Buccs sojourn in the top flight lasted just one season and Peter O’Donnell came on board as head coach in 2018 but a second successive relegation means Buccaneers will kick off season 2019/20 in Division 2A.

Eoin Brennan, Gavin Schoeman, Jimmy Screene, Martin Cahill, Mike Devine, Joe McVeigh, Kolo Kiripati, Garreth Halligan, Noel Mannion, Alex Hayman, Shane Layden, Martin Staunton and no less than five Rigney brothers (Brian, Des, Donal, Colm and Kieran) are among many of the fans’ favourites who have served Buccaneers splendidly on the playing fields. Robbie Henshaw became Buccaneers first home grown Ireland Senior international when only 19 in 2013 with another Athlonian Jack Carty earning his first Senior caps in 2019. Both were in the Connacht squad that captured the province’s first ever trophy the PRO12 in 2015/16. Robbie became British & Irish Lion no.824 in 2017 on their tour to New Zealand while Jordan Conroy, who scored 18 tries in 14 matches as Buccs won promotion to 1A in 2016, is now a key player on the Ireland Sevens squad. 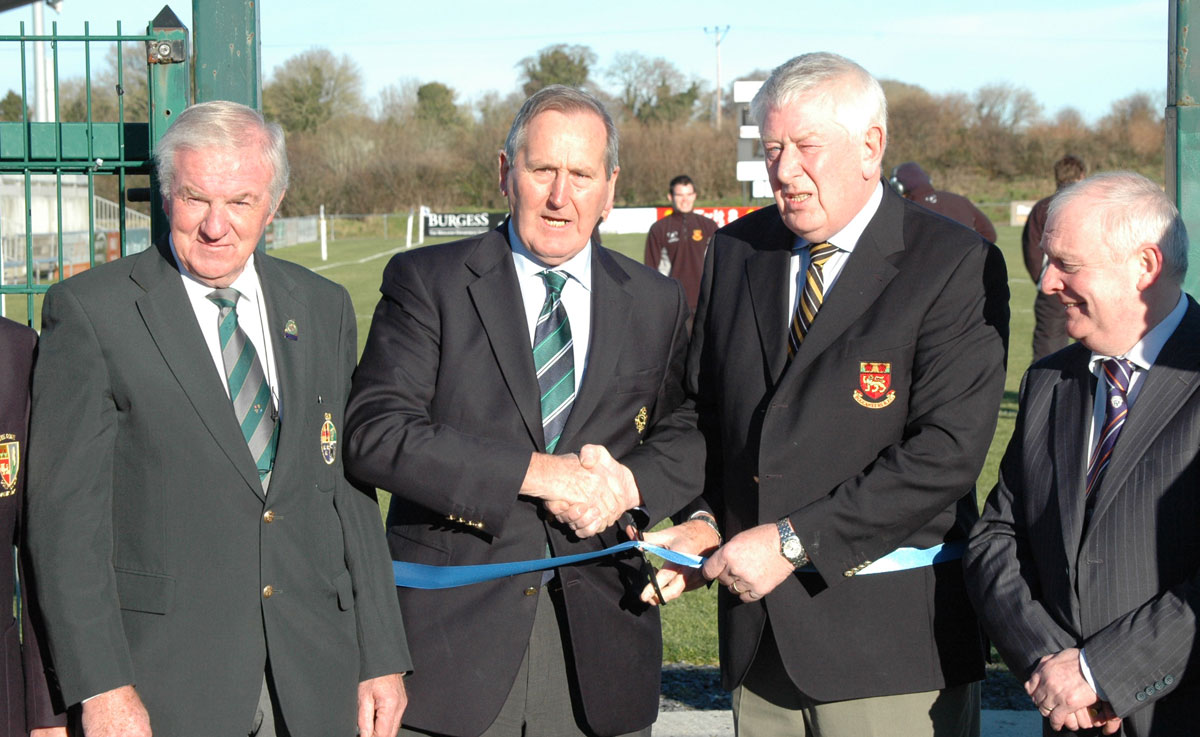 The 1999/2000 was also the inaugural year of the IRFU All Ireland U20’s league. Buccaneers took up the offer to participate. They performed extremely well and have maintained their berth among the top U-20 sides in the country in the interim. Buccs won the All-Ireland U-19 Cup in 2011 with a team that included no less than seven underage Ireland players, many of whom featured regularly with our Senior XV. Buccs now play in the Leinster U-20 League due to lack of competition in Connacht.

Ballinasloe withdrew from the amalgamation at the end of season 2005/6 and returned to the junior ranks in Connacht, winning the J2 league title at the first attempt. Meanwhile, all Buccaneers teams are now based in Athlone with the underage teams also playing as Buccaneers since season 2006/7 following the AGM of Athlone RFC which voted to change the name of the club to Buccaneers RFC.

Buccaneers grounds was renamed Dubarry Park in 2003 when the brand new clubhouse and ancilliary facilities including bar was officially opened by IRFU President Don Crowley. Since then the main pitch has been developed into a topclass venue including a 650-seater Stand, covered terracing, international standard playing surface and TV quality floodlights. It has hosted regular All-Ireland League and Cup finals in the interim and was a particularly successful stadium, on and off the playing field, for the staging of Ireland’s U-20 Six Nations Championship fixtures for a decade. The club dearly needs further pitches to cater for the growing numbers now playing at the club. Three adult teams are fielded most weekends with up to twenty underage teams plus a Womens team from 2011/12. Girls rugby commenced in 2014/15. Audi Athlone is the club’s title sponsor.

Meanwhile, the impressive clubhouse ‘The Bounty’ boasts a public bar and restaurant, serving topclass food and drinks daily. The facilities there can cater for virtually all occasions and ‘The Bounty’ was a finalist in the “Great Carvery 2012”.

Get involved with Buccaneers R.F.C

Rugby is a game for everyone. You are invited to get involved.