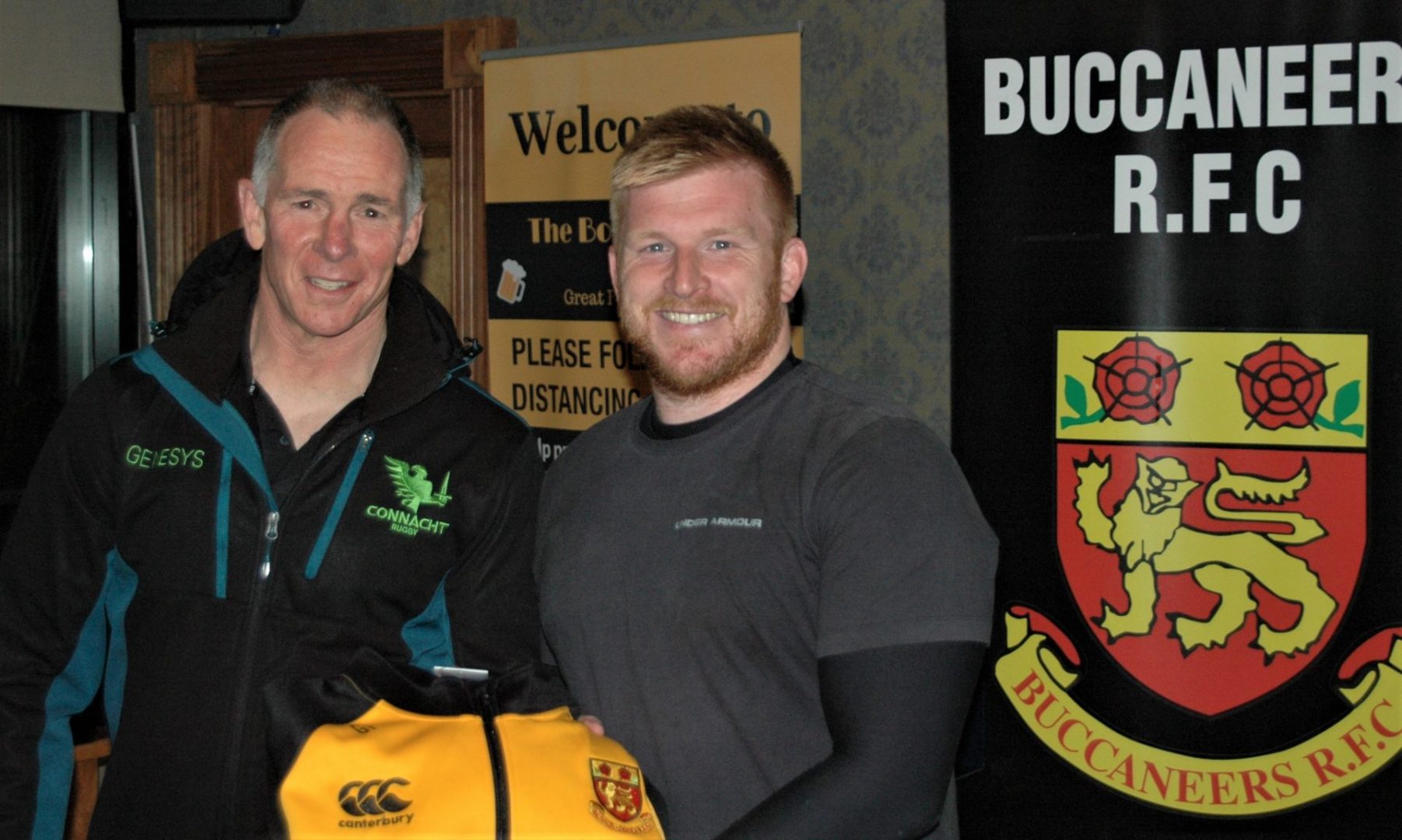 Buccaneers travel to the hotbed that is Connemara RFC this weekend buoyed by a hard fought 13-9 away win v Castlebar in the Connacht Junior 1A league at Cloondeash. Eoin O’Carroll made his debut and proved an inspiration at full back, as he started with his cousin Saul. Brian McDonnell also started following his cameo from the bench the previous week against Sligo as did Ronan Murray in a strong pack.

In near perfect conditions, Castlebar were favourites as the home team had beaten the aforementioned Connemara the previous week and, tellingly, had also dispatched Buccaneers in the Cawley Cup fixture last month. Buccs had not read that script, however, and with only 4 minutes on the clock Murray made a terrific rip on his own 22. The ball was shuffled across the line with superb control from Saul O’Carroll and Harry Balsiger to the waiting Eoin O’Carroll who had drifted onto the wing. Debutant O’Carroll took an outside line and had the sheer pace to outrun all the home cover the full length of the pitch to score under the posts. Andy Evans had the simplest of conversions and the visitors were 7 points up.

The rest of the half was a battle of wits with Castlebar pressing continuously, often on the Pirates try line, but the defence was resolute. Niall Harney sustained a knock after 15 minutes that the referee deemed serious enough to order him from the field, and replacement prop Sean Flynn was excellent. Castlebar were restricted to a couple of penalties which they converted and went into half time behind on a score line of 6-7. 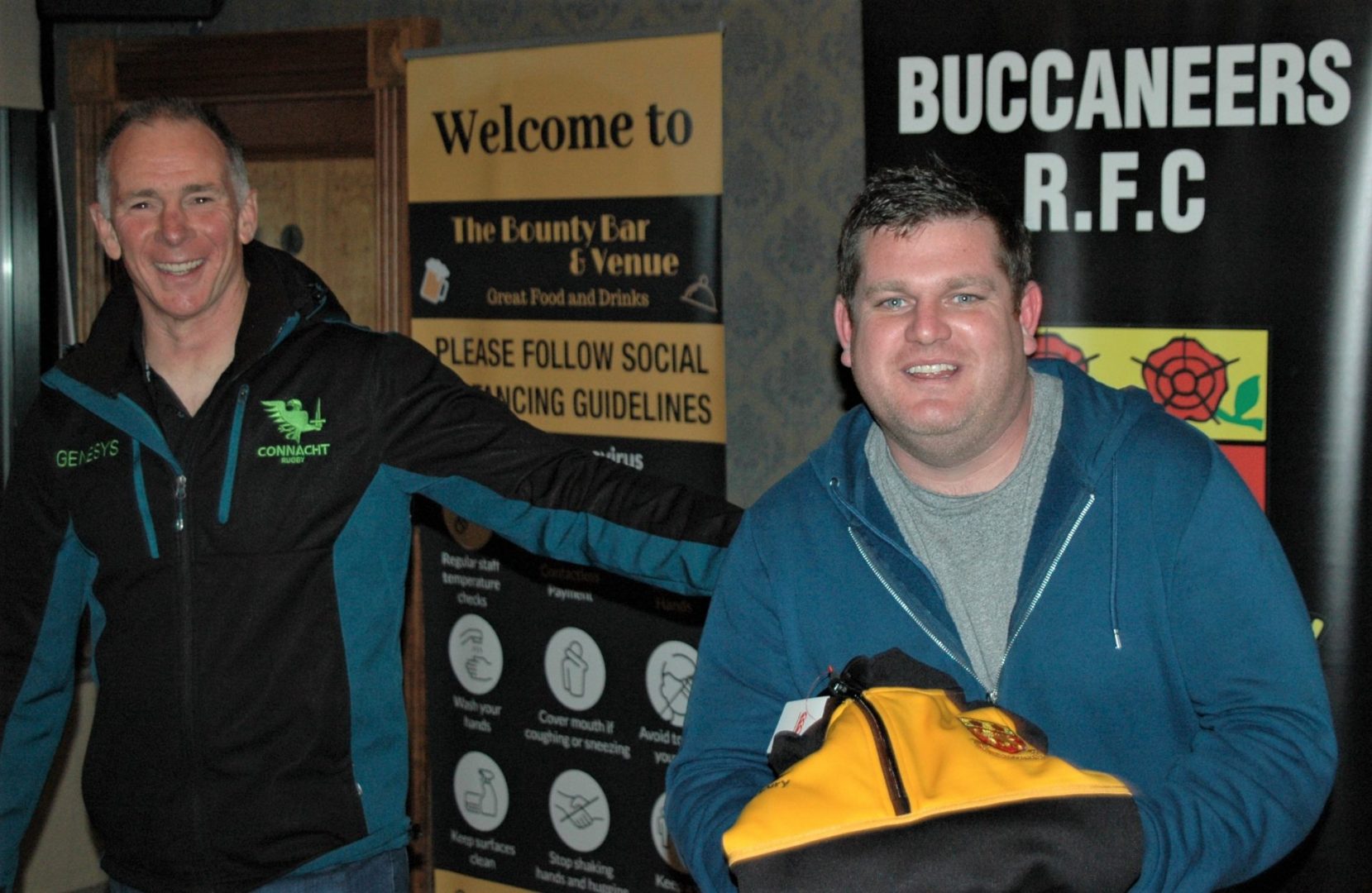 The second half was fought in the relative packs, with the only scores coming from a brace of penalties for Buccaneers in the opening 10 minutes of the restart from Evans, and Castlebar being restricted to a single successful penalty. Buccaneers were slow to recycle ball and with backs like the O’Carroll cousins and Balsiger outside, will surely look to get that right for future fixtures. Too often the visiting pack and half-backs were sucked into the arm wrestle when more vision and spark was needed. However, Buccaneers always were in control and with a yellow card for the home side towards the endgame, the visitors smartly closed out the match for an important win on the road on a score line of 9-13.

Eoin O’Carroll was assured at full back and is a great addition to the club. Trevor Thompson and Flynn locked down the scrum and ensured the Pirates were dominant in this key facet of the game. Back rowers Cathal ‘Mossy’ O’Grady and McDonnell won all the hard exchanges and carried magnificently whilst Liam Doyle on his introduction showed what he is capable of.

If Buccaneers are to hold their current position at the summit of the J1A league, they will need to be in top form against a Connemara side that are used to occupying that league position. The Connemara Blacks have been the form Junior team over recent years, but a vibrant Buccaneers Seconds will provide a strong challenge. Fergus Galvin is unfortunately out with injury, but Sam Kroupa returns and will bring a physicality that will be needed to prevail. Coaches Paul Byrne and Benny Gilligan targeted this game from the outset and will be ready for the Clifden challenge next Sunday.