MU BARNHALL got back to winning ways in the Energia All-Ireland League Division 2A when they overcame Buccaneers 23-10 in this Hodson Bay Group sponsored rescheduled fixture under the Dubarry Park floodlights on Friday night. But this was a much more closely contested encounter than the scoreline indicates for a final move of the game try gave the league leaders a flattering winning margin whilst also denying the Pirates a losing bonus point, which was the very least the Athlone club deserved.

Weather and playing conditions were perfect (in vast contrast to the previous Saturday) and a generally fast-flowing and entertaining contest unfolded in front of a decent attendance boosted by considerable travelling support for the visitors. Buccs made four changes (three enforced) for this match, three of them in their three-quarters line with injury also ruling hooker Declan Adamson out.
Nevertheless, the midlanders made a lively start and an early lightening break by Rory O’Connor almost outmanoeuvred the Barnhall defence but led to a penalty on the left which Luke Carty thumped over after 4 minutes. However, the light blues responded swiftly and, following a penalty to the right corner and a subsequent series of close-in scrums, William Reilly peeled away for an 8th minute try converted by his half-back partner Adam Chester.

Play continued in end to end fashion and Colm Reilly was stopped just short of the visitors’ line. When the ball was recycled a high tackle denied Sean Masterson as he attempted to ground the ball. Following the ensuing penalty, Carty made a snipe before sending Graham Lynch in for an 18th minute smartly-taken try which Carty converted. While justice was done, it was surprising that neither a penalty try was awarded or yellow card produced for the try-saving high tackle. 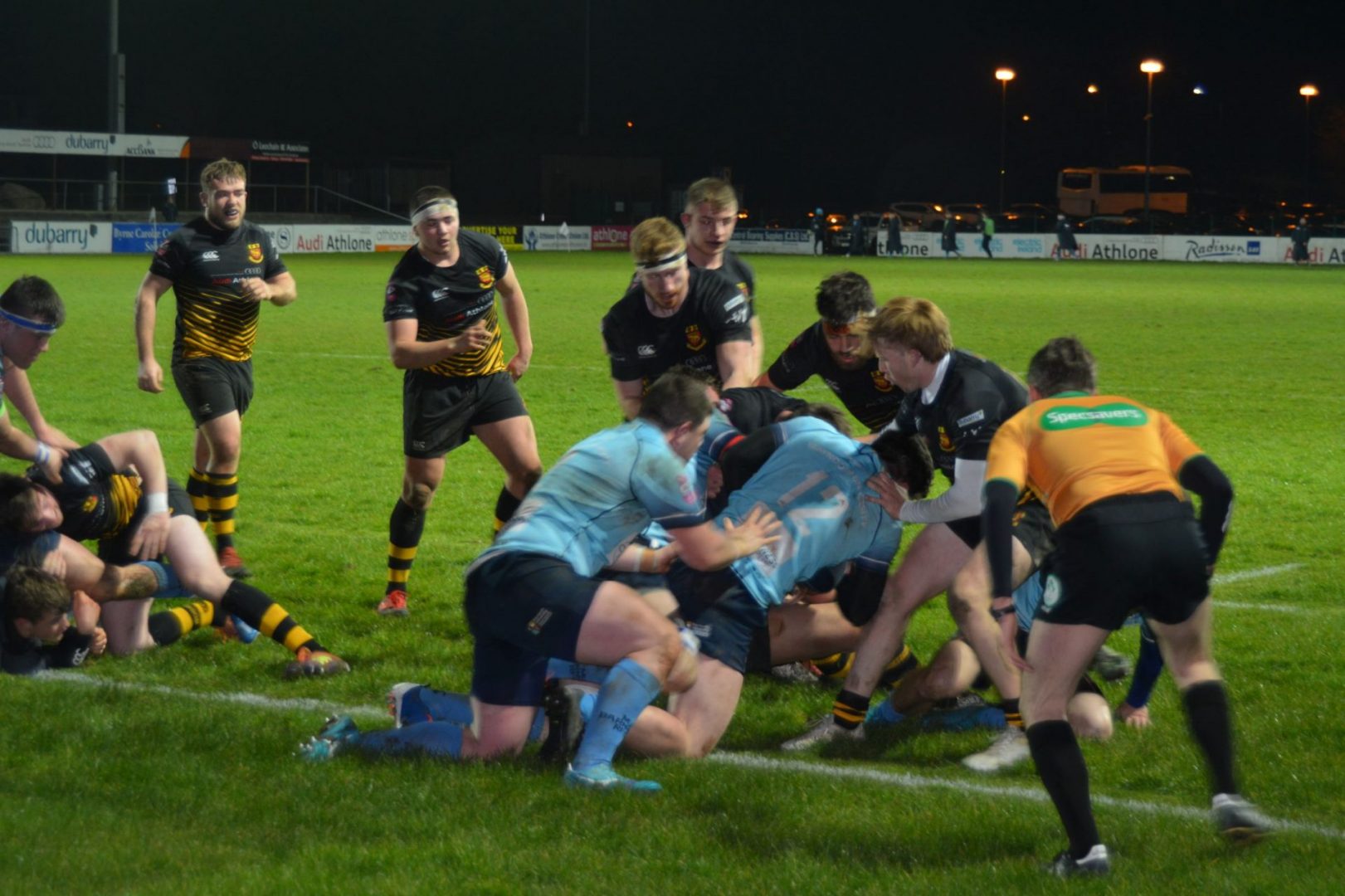 Nine minutes later Chester levelled the scores after Buccs were caught offside. Carty then saw a booming on-target penalty kick from the halfway line dip just under the crossbar and so the teams were evenly matched 10-10 at half-time.

O’Connor, with Eoghan O’Reilly in support, made another typically exciting break just after the change of ends. Then a 47th minute MU Barnhall lineout went awry close to their line but the ball squirmed from Reilly’s grasp as Buccaneers continued to take the game to the visitors. As a light drizzle commenced, it remained nip and tuck. The Pirates, despite a period of pressure, could not capitalise on Gareth Murray’s yellow card for a 57th minute tip tackle before Chester’s 65th minute 40-metre penalty edged the Leinster side back into the lead.
Soon afterwards substitute Darragh Murray got a blockdown on an attempted clearance by Chester but the ball spun into touch before Buccs could capitalise. Matthew Alborough made a terrific break for MU Barnhall as the game continued to ebb and flow before Chester extended the visitors’ lead to 16-10 with a 72nd minute penalty.

Buccaneers then suffered a sucker punch with the clock in the red after MU Barnhall found touch just metres from the home line. Buccs, inexplicably, opted for a long lineout throw which was overhit and the visitors promptly capitalised with big lock Brendan McSorley powering over for a try and Chester duly added the conversion to complete their 23-10 winning margin.

This was rough justice for Buccaneers whose overall performance in a very entertaining joust was highly commendable. The team continued their recent improvement and, had execution been that bit sharper, then they would surely have taken at least a point or two from this contest. 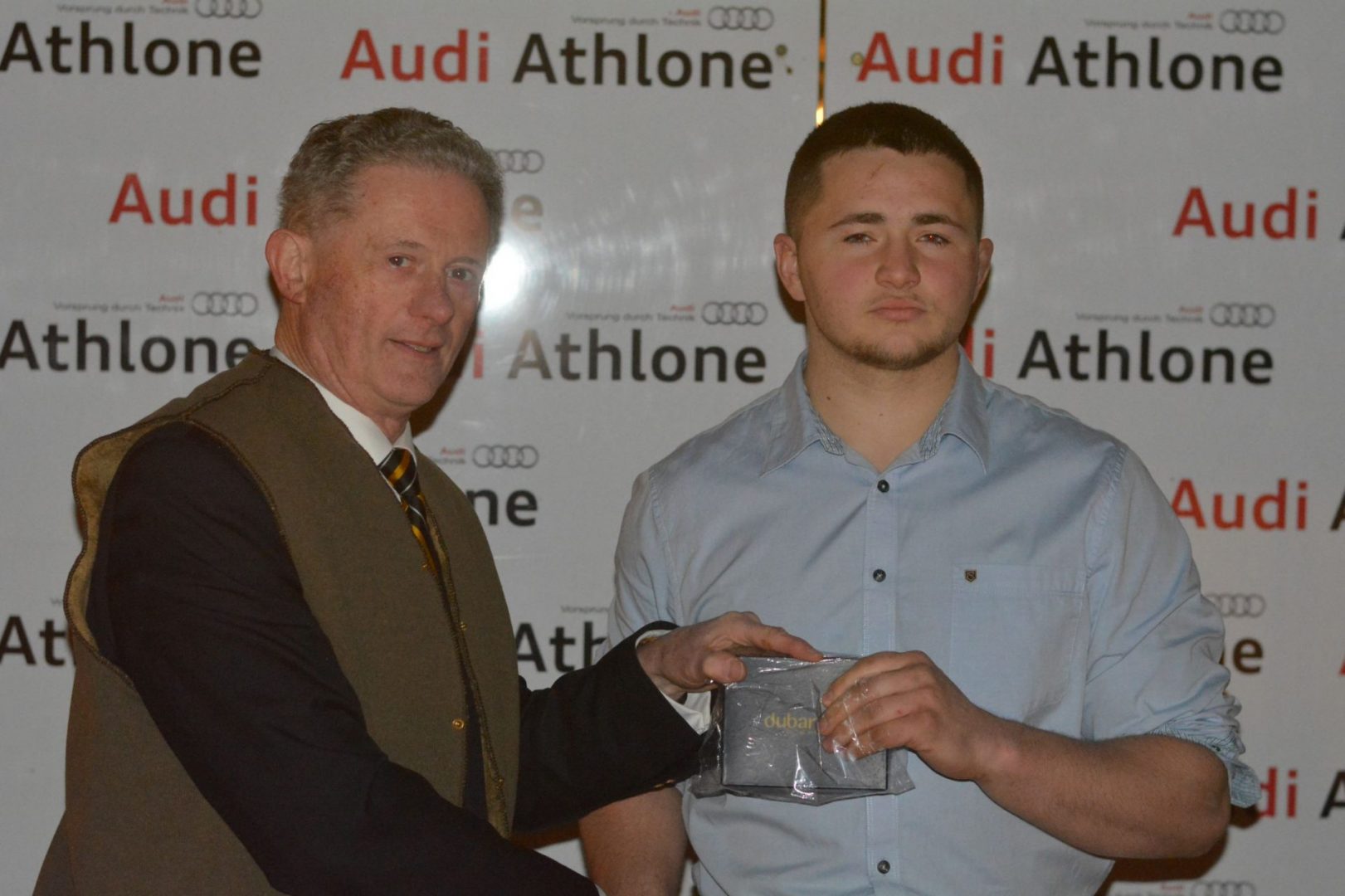 Teenage prop Harry O’Reilly was a worthy ‘AUDI ATHLONE Man of the Match’ winner and another young duo Oisin McCormack and Matthew Murphy acquitted themselves well in the forwards exchanges against a bigger pack. O’Connor looked the Pirates most potent back and half-backs Carty and Reilly were composed throughout. Workrate and tackling were generally impressive and, had their execution been a bit sharper on occasion, then Buccs could have claimed a significant scalp in a most encouraging display.