BUCCANEERS disappointing start to the Connacht Senior League continued at balmy Dubarry Park on Saturday afternoon when Ballina proved too hot to handle for the youthful Pirates who were defeated 26-12. The Mayo side were full value for their bonus point victory which keeps them level with champions Sligo on top of the league table.

Buccs made six changes from their loss at Sligo with Shane Layden and Ruairi Byrne making their first appearances of the season while a quartet — Thomas McGann, Gerard Fallon, Sean O’Connell and Ronan Murray — who came on as replacements at Hamilton Park got their chances to start on this occasion. However, it made for little improvement with Buccs being too lightweight overall and lacking guile against the well-drilled and physically stronger visitors.

The north-westerners made an early breakthrough with Alex Corduff romped through the middle before off-loading to Ronan Molloy for a 12th minute try between the uprights giving Darragh Whyte the perfect position to convert. This was a tone of what was the follow all too regularly.

15 minutes later a Buccs lineout on halfway went awry and Luke Sweeney swooped to secure possession and he made ground far too easily before sending Molloy away for his second try wide on the left. When the midlanders finally put a decent move together Ross Murphy-Sweeney made promising yardage down the right flank but support was far too slow arriving and the chance went abegging.

Further porous home defending enabled Ballina to notch their third try just before half-time, Micky Murphy capitalising this time to dot down between the posts and Whyte converting to give the men in green a 19-0 cushion at the interval. 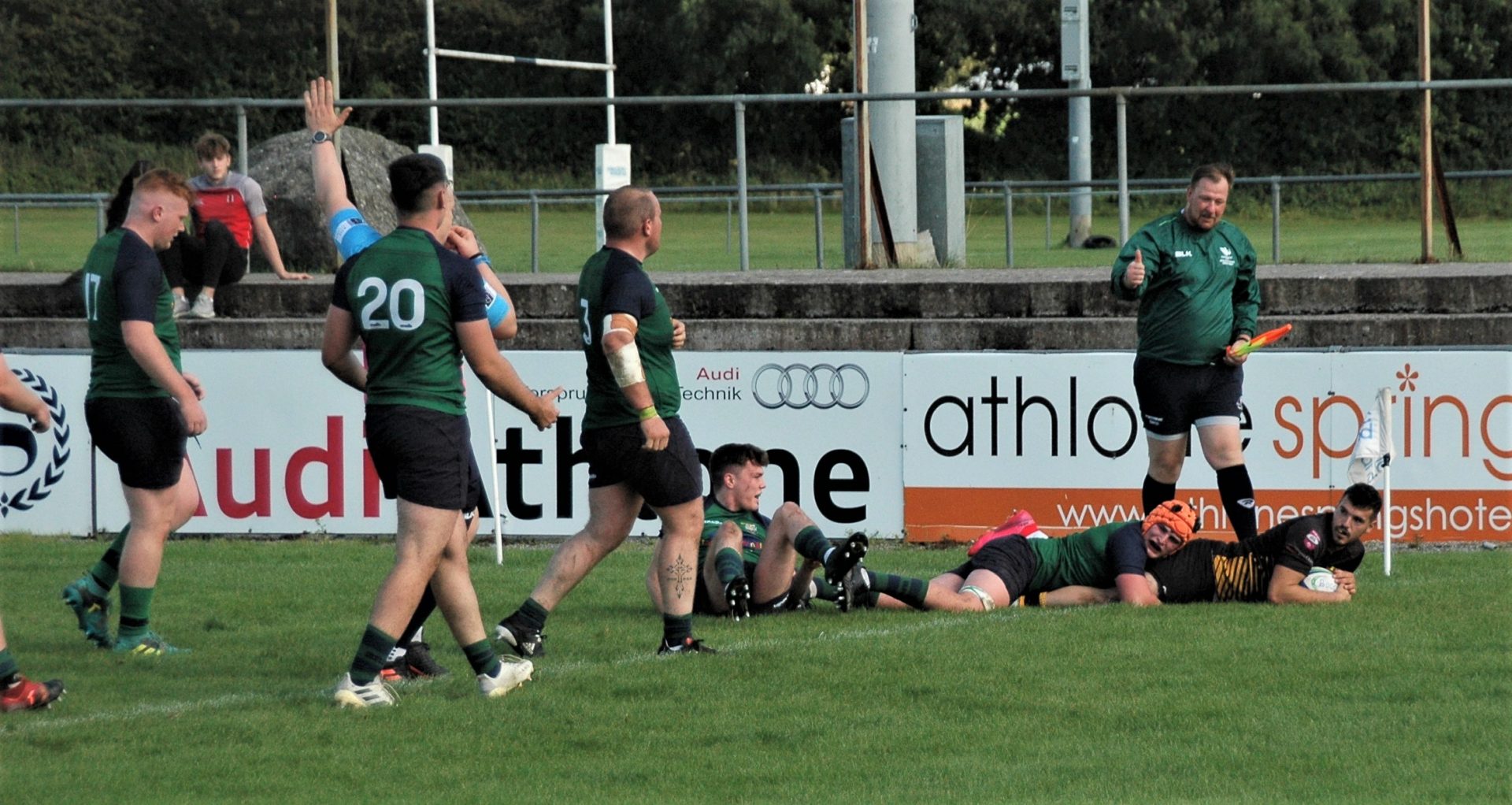 Ten minutes into the second half Buccs were held up over the Ballina line but they quickly returned to the red zone where Darren Browne surged over for a 54th minute try. Michael Hanley added a terrific conversion from the touchline and it looked briefly that the homesters might make it a tighter contest. But they let their guard down just three minutes later when Callum Quinn smartly tapped a penalty inside the ten metre line and he drew the final defender before passing to Murphy, operating at fly-half this season, who darted in for his second try which Whyte converted.

Buccs kept battling away and Ballina gradually lost their composure with Tom Hannigan incurring a yellow card on 68 minutes. From the subsequent scrum, Evan Galvin drove forward before linking with Layden who sucked in the cover before off-loading to McGann who scampered in for an unconverted try in the left corner.

A needless late and dreadful tackle by Callum Quinn on Hanley left the referee, following consultation with a touch judge, little option but to send off the big Ballina centre with seven minutes remaining. But Buccs lacked the smarts to make their numerical superiority count, a number that grew to three in the final minute when Whyte was sent to the sin bin as the Pirates tried desperately to at least salvage a losing bonus point.

Buccs seemed to get on the wrong side of the referee at rucks while the visitors quickly spotted the potential to gain ground up the middle. There were some green shoots in the Pirates crew in a rebuilding phase with Cian McCann and Koronato Kiripati (“Kolo Og”) showing promise while Evan Galvin as always put in a solid shift while both wings looked like they could score had they got a decent supply. Sweeney, Billy McVann and Molloy were best for the victors who are on the up after a couple of tough seasons.