BUCCANEERS J1’s could not match the power of a more seasoned Westport when they went down 34-12 to the visitors in their Connacht Junior 1A League game played at Dubarry Park on Sunday. Buccs, missing some key operators including Torin Rensford, Ryan O’Meara, Matthew Murphy, Eoin O’Reilly, Michael Hanley and Thomas McGann, struggled particularly in the tight where the Bulls had a distinct advantage in size. The Pirates did not help their cause with handling errors and some overcooked kicks.

The homesters almost got off to a flying start when Callum Forde, at fullback on this outing, made a terrific snipe but, after withstanding early home pressure the visitors opened the scoring with a 15th minute unconverted try wide on the right by Ruaidhri Spellman. The hosts then twice kicked the ball dead in quick succession as they responded before Aidan Wynne waltzed through from the ten-metre line for a splendidly taken 21st minute try which Gerard Fallon converted. Unfortunately Wynne was injured shortly afterwards, a further massive loss to the youthful Pirates before David Keane’s 30th minute penalty edged the Mayo side back into the lead. Fallon was unable to land a long penalty just before halftime which arrived with Westport 8-7 ahead. 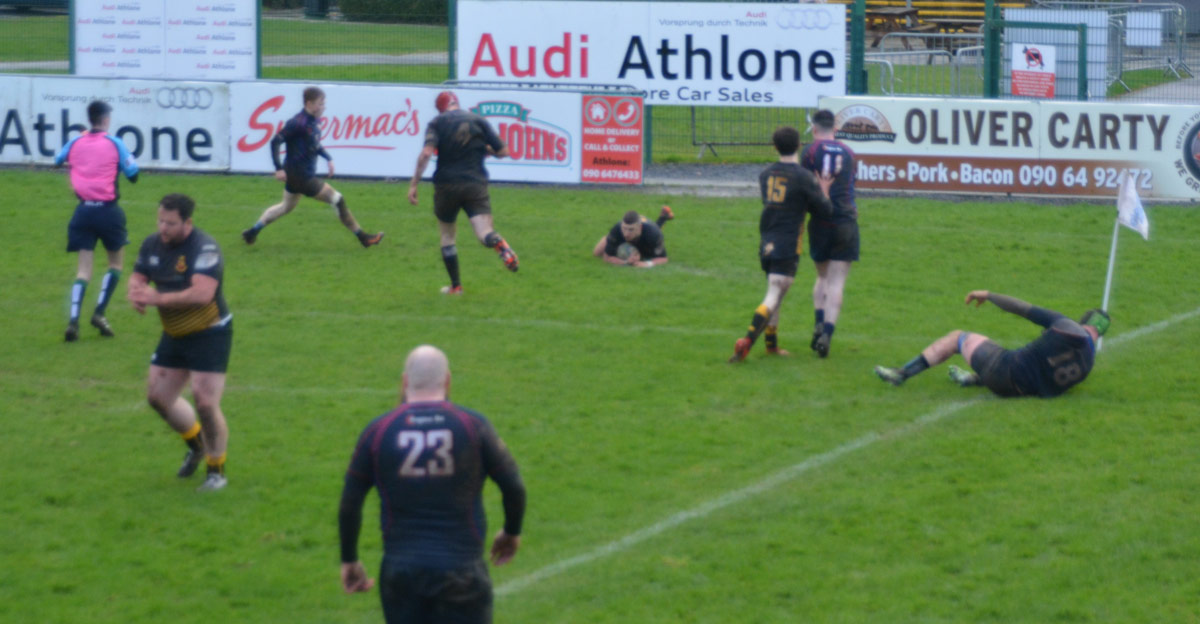 Injury forced hooker Rory Grenham’s withdrawal at half-time, replaced by Cian Daly. The blustery breeze, now favouring the visitors following the change of ends, became stronger and more influential as the game progressed. Two minutes into the second period Kevin Corcoran intercepted on halfway to run in for a sucker try for the Bulls which Keane converted. Seven minutes later Keane found a yawning gap in the home cover to scythe in for a try which he duly converted.

Corcoran notched his second intercept try just after the three-quarters stage, Keane again adding a conversion to this bonus point touchdown. The outhalf, who contributed 21 points to Westport’s tally, then grabbed his second converted try seven minutes from time. The Bulls, whose high tackle count must surely have been in double figures, finally incurred a yellow card when a replacement prop was sin-binned late in the game. Gritty but outgunned Buccaneers nevertheless continued to battle and Sean Flynn and Forde combined neatly to send Daly scampering in for an unconverted try wide on the right after a sustained spell of pick and goes.

Buccs could have done with more of their heavy artillery for this contest especially in the testing conditions. Young guns Harry O’Reilly and Fergus Galvin took the game to the visitors time and again with Robert Enraght-Moony, Forde and Wynne looking the pick of the backs. Defeat keeps Buccaneers rooted at the bottom of this division albeit they have a game in hand.