It may not be titled the Connacht Senior League this season but champions Sligo made the perfect start to their campaign when overcoming Buccaneers 33-14 in their Energia Community Series opener at Dubarry Park, Athlone, on Saturday. The visitors’ forwards had a substantial size advantage over the hosts’ pack and made the most of it as they secured a bonus point victory.

The north-westerners got a tonic start, the Pirates trying one too many pass in midfield and this was swooped on to send Jack Keegan running through from the ten metre line for a 4th minute try which Euan Brown converted. Buccs responded swiftly and gained ground via a brace of penalties to touch along the right flank. From the second of these, Ruairi Byrne won possession and Darren Browne surged over for a 9th minute try which Luke Carty converted to tie the scores. 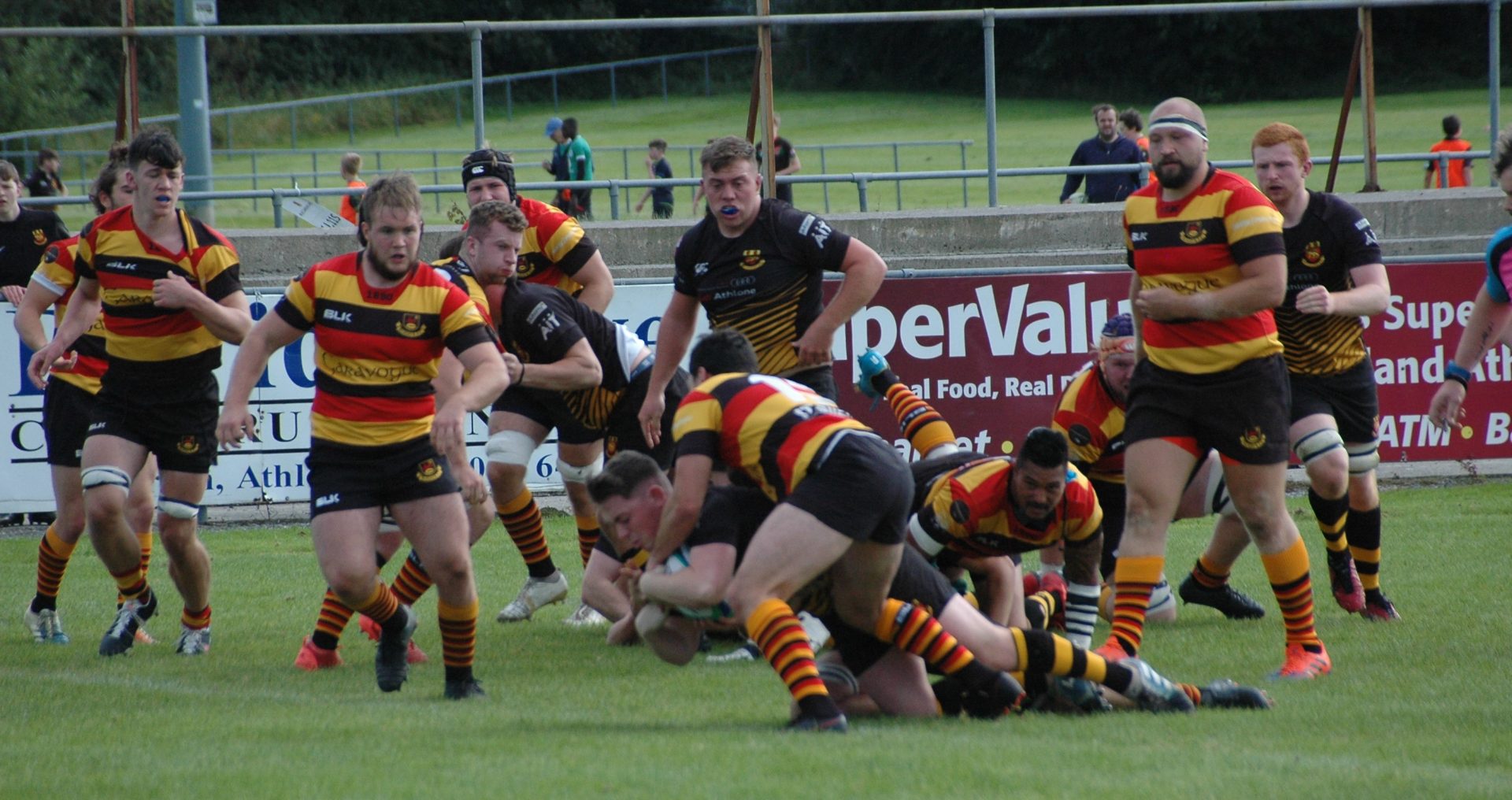 Sligo regained the lead seven minutes later following a penalty punted to the Bounty corner. From the lineout, their pack powered over with substitute Matthew Earley (introduced after a mere two minutes) grounding the ball for a try which Brown converted. On the half-hour mark, Buccs put a tremendous number of phases together from their own five metre line to the opposition’s 22 (by far the best sequence of this encounter) where the ginormous Sligo pack repelled the midlanders. Thus the score was 14-7 in favour of the Yeats county side at half-time.

In glorious sunshine and on a near perfect pitch, home supporters where hopeful that the livelier looking Buccaneers players could outmanoeuvre last season’s Connacht double winners. Rory O’Connor was decidedly unlucky with an intercept attempt just two minutes after the change of ends. Then, following a crossfield kick, Brown fastened on to possession and chipped over the cover to notch a 45th minute try to extend Sligo’s lead to 19-7. The outhalf added his second try eleven minutes later following Sligo’s best move of the game and he duly converted this bonus point touchdown. Shortly after the second half waterbreak, James O’Hehir finished off a maul for Sligo’s fifth try with Brown landing his fourth conversion for a clearcut 33-7 advantage.

Buccaneers continued to battle and Sean O’Connell was unfortunate to have a 65th touchdown disallowed. The young Pirates crew finally got some reward for their enduring efforts with Darragh Corbett finishing off some spirited play for 71st minute try which Carty converted. This completed the scoreline as Ben Daly just could not grasp a final move of the game pass that would have put a fairer reflection on the final margin.

Sligo, fielding a cosmopolitan squad, were confident and sharper at key moments. They gave debuts to Brazilian international duo giant tighthead prop Pedro Bengalo and fullback Guilherme Coghetto. Both have 15 caps each for their country and were very influential in the proceedings. Fly-half Brown and loosehead prop Kuba Wojtkowicz also made notable contributions.

Missing seasoned performers such as Martin Staunton, Shane Layden, Callum Boland and Frankie Hopkins, Buccaneers fielded a very inexperienced side at this level. But, although physically outgunned in the scrums, they refused to wilt and will have learned some key lessons from this setback. A youthful front row trio battled to the bitter end and another rookie blindside flanker Fergus Galvin was busy alongside brother and new skipper Evan. O’Connor and Mark Balaski looked a threat with ball in hand but (as Leinster found out) when supply is seriously curtailed that limits impact. However, there is promise and potential in the squad that, with some fine-tuning and a bit more streetwise nous, can be competitive in this new tournament.