BUCCANEERS edged out Cashel in the first meeting of the clubs when they played out a dogged and whole-hearted encounter at Dubarry Park on Saturday. The Athlone side prevailed 8-3 in a low-scoring but sometimes feisty Energia All-Ireland League Division 2A duel on a breezy afternoon.  Buccs fifth victory in the last six matches sees the Shannonsiders up to joint fifth in the league table.

Buccs had three changes, all in the pack, from the previous week’s win at Dolphin. Injuries in that game ruled Declan Adamson, Ruairi Byrne and Ryan O’Meara out. Prop Conor Kenny made his first start of the season with Rory Grenham coming in at hooker while Christian Maulaulau, recovered from flu, returned at blindside flanker with last week’s debutant Niall Murray switching to the second row. 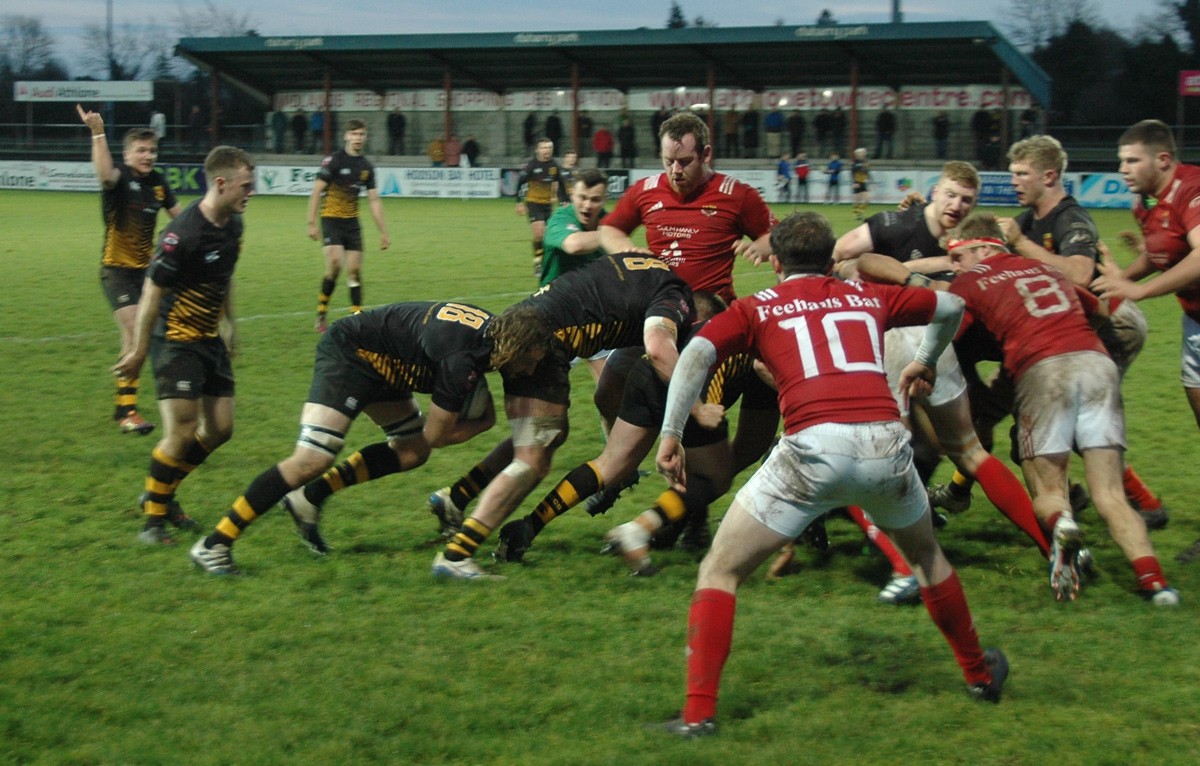 On a bright day, the Pirates playing away from the clubhouse had first use of the considerable breeze and assumed territorial dominance from the start. They earned a 4th minute penalty but Luke Carty was narrowly wide from 40 metres. From the restart the outhalf then launched a lengthy drop goal effort which was also narrowly off-target.

Buccaneers continued to keep the visitors on the back foot but found Cashel aggressive and unremitting in their defensive duties. Chances proved as scarce as hen’s teeth as Buccs endured a frustrating opening half that was in complete contrast to the style and pace displayed against Dolphin.

Max Kennedy was yellow carded for deliberate offside at the end of the opening quarter but had the referee spotted a clearcut knock-on by the Munster men as Buccs drove them towards their own line at a five metre scrum in the same incident, then the homesters could have got a much earlier breakthrough. 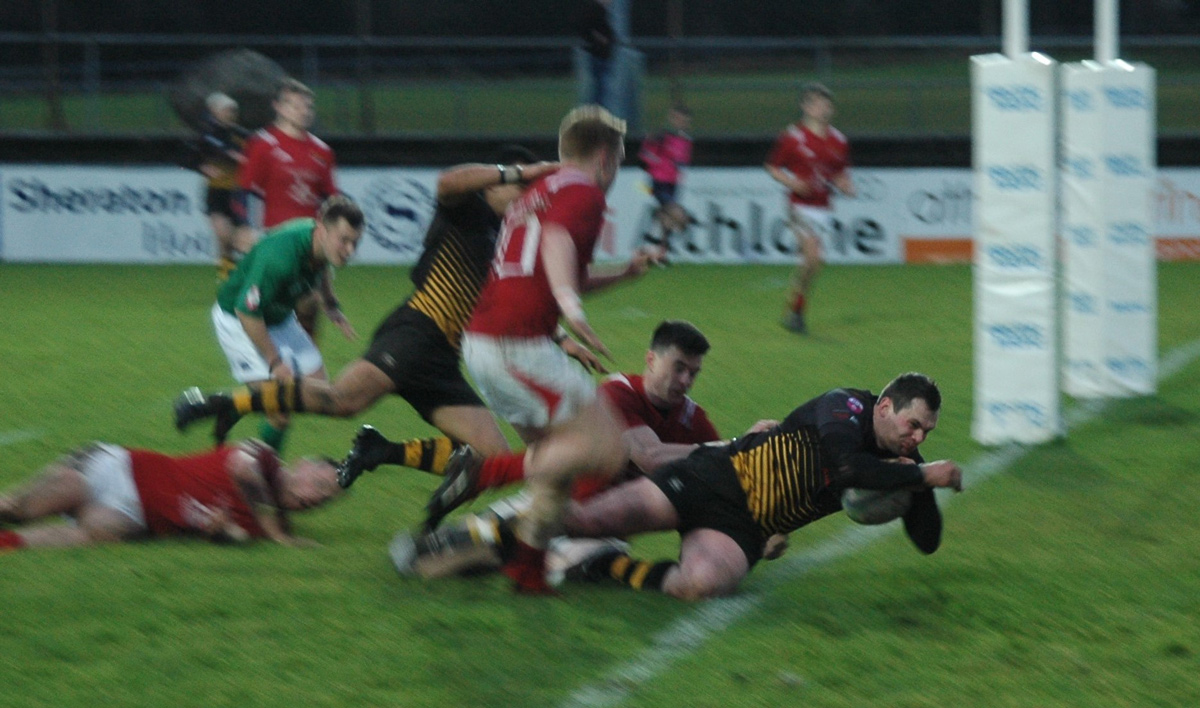 Buccaneers continued to dominate both possession and territory with the Reds making only rare forays into the home half and it seemed that half-time would arrive without the scoreboard operator being troubled. However, four minutes before the interval Carty drilled over a penalty from just inside the Cashel half. Then in the final moments of the half, Cashel prop Cormac O’Donnell was sin binned at a scrum in midfield. With the final kick of the half, Carty’s penalty from inside his own half faded to the wrong side of the uprights. A 3-0 lead for the Pirates looked decidedly vulnerable in the prevailing conditions.

Buccs, with Colm Reilly coming in at scrumhalf, restarted in a more energised mode and put a very promising move together that ended with a crossing offence. It was now time for the midlanders to show that they too had resilient and capable defensive qualities as the visitors sought an early second half score. Bit by bit the Pirates began to again make inroads into the high kings territory. On the hour mark after some persistent home play, Carty’s teasing chip over the cover wrong-footed Conor Cashman and Shane Layden hoovered up the loose ball to seize a rare scoring opportunity. With Maulaulau in support, the Pirates skipper dived over for what proved to be the decisive score, a 61st minute try that Carty surprisingly was unable to convert. 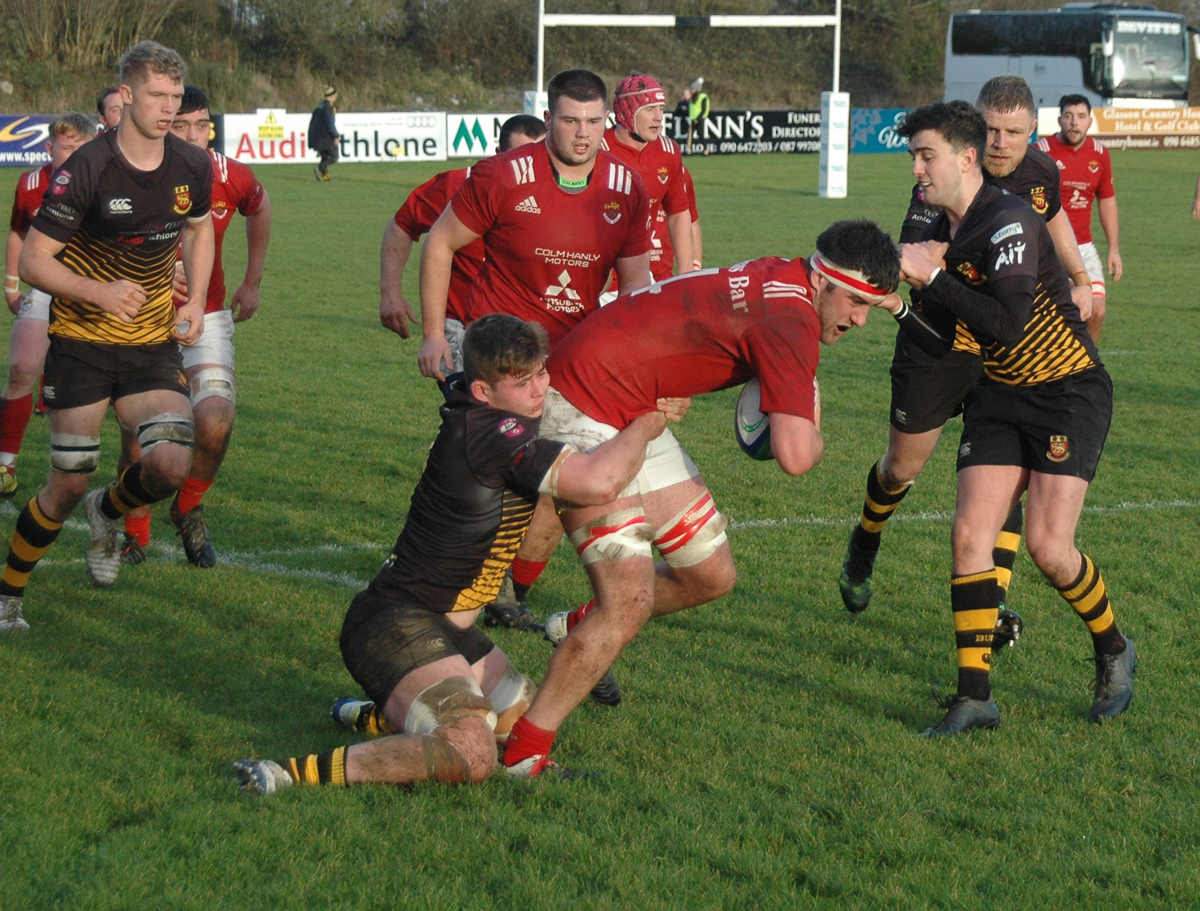 Ten minutes from time, Buccs were punished for not rolling away and substitute Eamonn Connolly kicked a fine penalty to set up another tight finish. But Buccs now had the bit between their collective teeth and a 75th minute kick ahead against the elements proved just a fraction too strong for the chasing Darragh Corbett.

Then in the final move of a tough contest, Buccs went through the phases with focus and discipline before Evan Galvin pounced on the ball over the Cashel line. Referee Andrew Cole was ideally placed, yet deemed he could not clearly see it being grounded!

This let off ensured Cashel, who celebrate their Centenary this month, travelled home with a losing bonus point that keeps them in third place. This was probably due reward for their gritty and sustained efforts. Meanwhile, Buccaneers showed that they can put in the hard graft too when necessary. This display was a complete contrast to the more enterprising style displayed against Dolphin, but nonetheless effective against a typically doughty Munster type effort from their opponents. 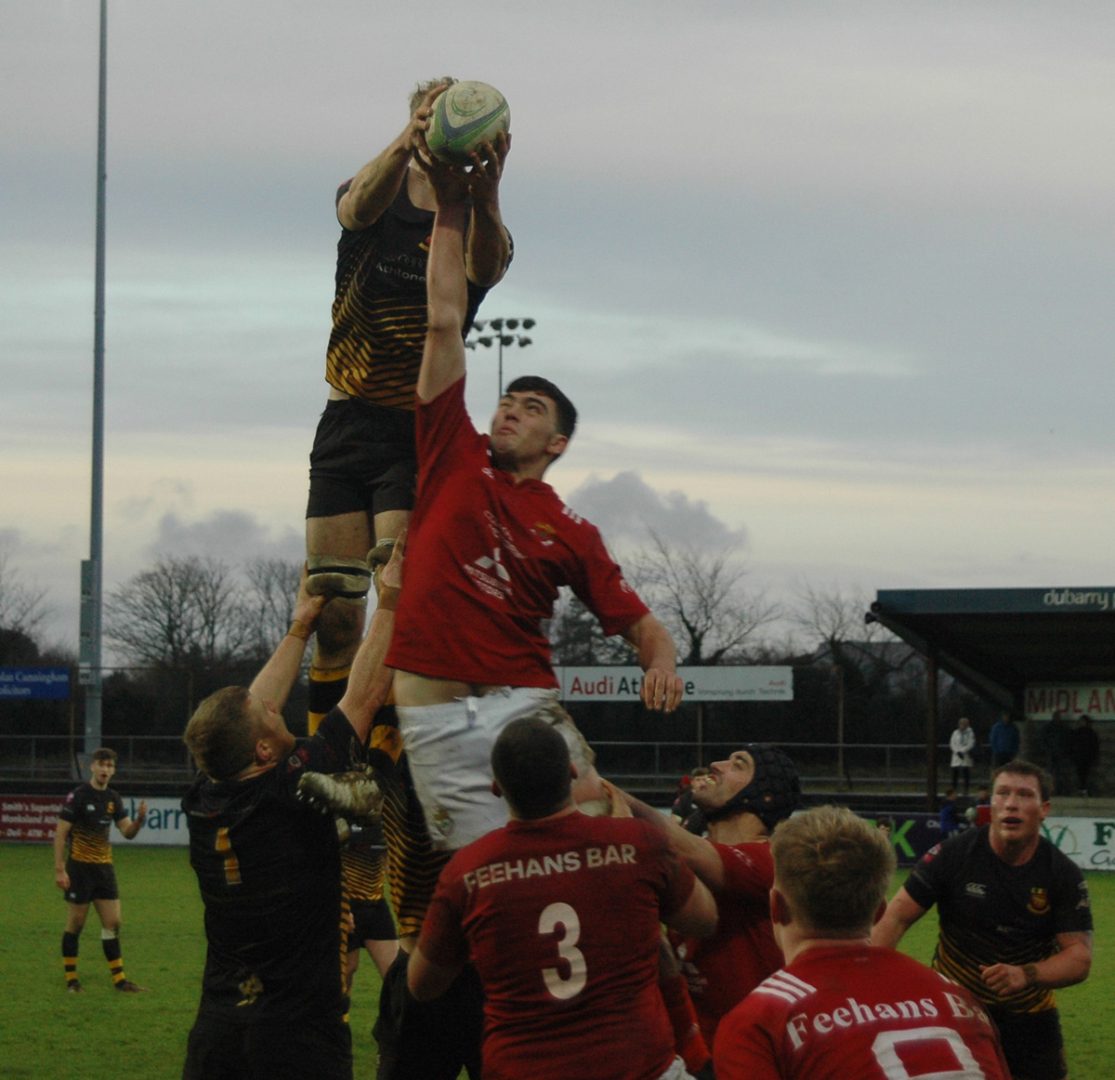 The back line got few chances to unleash their potential but Layden is again displaying terrific form and his try was just reward for his endeavours. The pack, collectively and individually, put in tremendous shifts particularly Sean Masterson, Galvin and Martin Staunton. The Audi Athlone Man of the Match accolade deservedly went to young lock Murray who was immense in many facets of this gripping battle. 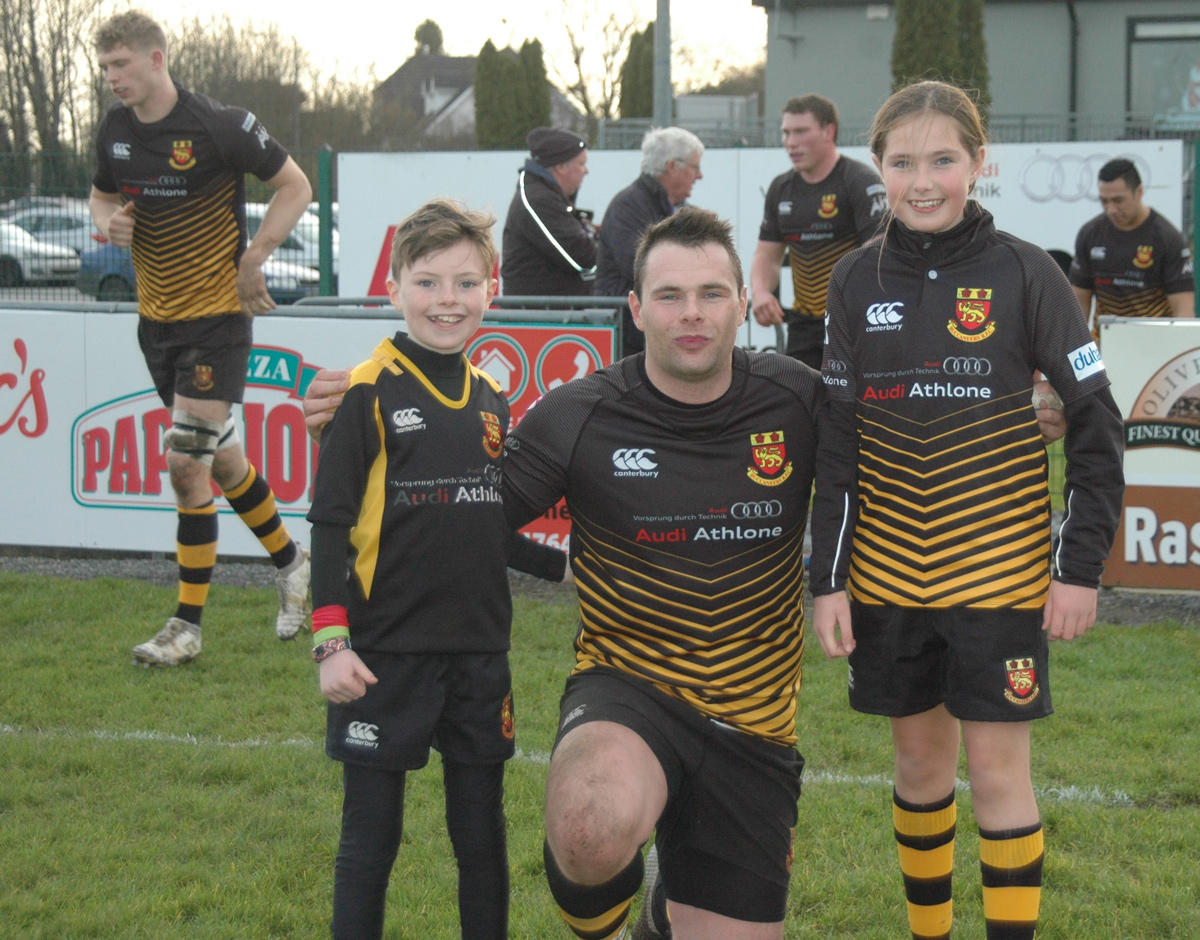