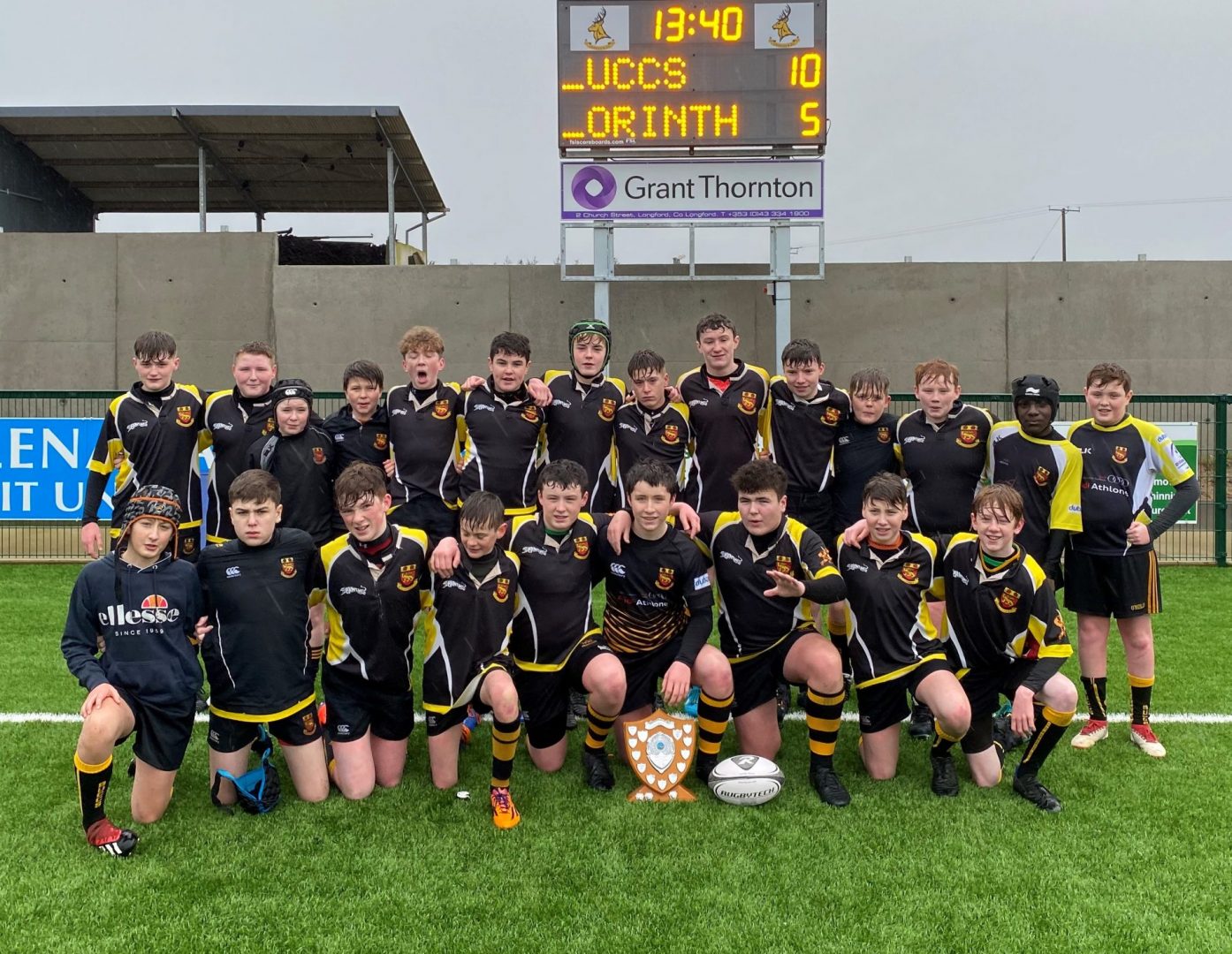 Last Saturday, February 15th, at Creggs RFC, Buccaneers U-14 ‘black’ squad defeated Corinthians 10-5 to capture the Connacht Rugby U-14 Division 1 League title.  In tough conditions with constant driving rain and wind, resembling the middle of winter rather than spring, the Buccaneers side out-muscled the opposition to claim the title. The excellence of Buccs was built on commanding set-pieces, ferocious work in the tight, hard-hitting tackles and good running lines by the backs.

This is only the fourth time since 2002 that Buccaneers have claimed the U-14 Connacht Division 1 League title, the others being in 2007, 2008 and 2014. The 2007 and 2008 teams being the launching platform for some famous Irish players, namely, Robbie Henshaw and Jack Carty.

This league final was a tough affair. Buccaneers played into a strong gale in the first half. Buccs didn’t give Corinthians an inch and through their ferociousness in the tackle they kept Corinthians under sustained pressure. The front five were dominant in the tight, Nathan Downes, Eoin Naughton, Jacques Bourdon, James Heaslip and Rian Claffey out-muscled their opposite numbers, dominating the scrums, lineouts and tight play. Buccaneers backrow of Sean Walshe, Otega Awhinawhi, and Callum Kelly were highly industrious, turning over ball in rucks, tackling with menace and running strongly with possession. This sustained pressure kept the Galway side pinned deep into their own 22.

Buccaneers backline were in no mood to let their opposite numbers out of the 22. Strong tackling by Charlie O’Carroll, Thomas Cotton and Niall Derwin ensured Corinthians remained under pressure. Conor Naughton ran hard from the out-half position tying up Corinthians defenders. The occasional mistake by the Athlone team allowed Corinthians to use the wind to clear their lines, but Buccaneers would keep coming back and the back three of Conor Dowling, Sean O’Donoghue and Dylan Bruton fielded the Corinthians kicks and ran back with purpose always getting past the first defender to establish a stronghold in the opposition half.

The breakthrough for Buccaneers came when a big hit by Derwin turned the ball over, Buccaneers quickly recycled, then used their pods with strong carries by the forwards freeing up space for the backs to exploit. After quick and accurate passing, in dreadful conditions, the ball was transferred from O’Carroll to Cotton who found Derwin. He straightened the line before sending Naughton away to score in the corner with O’Donoghue in support. The conversion was missed, leaving Buccaneers closing the half 5-0 in front.

In the second half Buccaneers kept the pressure on Corinthians, but the occasional penalty allowed Corinthians to exit their half.  After establishing a foothold in the Corinthians half the Pirates pressure forced their opponents into making a mistake. Cotton blocked an attempted relieving kick by the Corinthians full back in the 22 and the scramble saw the Corinthians winger go to kick, which was blocked by Derwin. The ball ricocheted like a pin ball and went over the try line where Dowling was alert and first to react to touch down for Buccaneers to extend the lead. The conversion was missed leaving the score 10-0 with 18 minutes to go.

Corinthians upped their intensity and some tired bodies on the young Pirates side allowed Corinthians to score a try in the corner. The conversion was missed, leaving the score 10-5 with 10 minutes left. Buccaneers made some substitutions with Samuel Slevin and Tom Sheehan coming in to replace Downes and O’Donoghue. With tremendous pressure being applied by Corinthians the Buccaneers team were getting on the wrong side of the referee, conceding penalties and territory.  Claffey was penalised for a high tackle and shown a yellow card, leaving Buccaneers down to 14 men with 5 minutes left on the clock. The ethos of hard work and never say die attitude amongst the Buccaneers squad, was evident for all present as the Buccaneers team rallied, regained their composure and rebuffed all attempts by Corinthians to score in the final moments.

Credit must go to the Buccaneers coaches, Graham Heaslip, Eugene Forde, John O’Carroll, Shane Naughton and Ger O’Donoghue, who have developed a playing style and tactics that utilises the strengths of the team. The skill set, work ethic, tactical awareness and ability to adapt to changing weather conditions has ensured success in the league that bodes well with a cup run to follow.