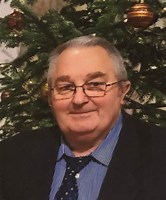 The death has occurred after a long illness borne with great fortitude of DANNY O’NEILL. Danny was involved in rugby in Athlone and Connacht for many decades from schooldays to playing underage and adult rugby with Athlone RFC. He was a highly respected coach in the club and later a renowned referee whilst he also served as Secretary of the Association of Referees, Connacht. He was honoured as President of that Association in season 2002/3.

Danny played in three Connacht Junior Cup finals, being on the victorious Athlone team of 1979 when his try proved the decisive score. He also played with Galway Corinthians for a number of seasons where he won an All-Ireland League title.

Danny was a willing and committed volunteer in various sometimes unappreciated club roles for many years. He spent countless often wet Saturday mornings lining pitches for weekend fixtures and also was an engaging but firm doorman at Discos in the old clubhouse. For ten years Danny was the driving force in the highly popular 5-a-side Soccer Summer Leagues staged at Keane Park. He found time too to commentate on Buccaneers matches on Midlands Radio during the heyday of the All-Ireland League.

Danny thought ‘outside the box’ and his viewpoint did not always concur with the mainstream but he stuck to his principles and beliefs and did not suffer fools lightly. A larger-than-life figure, he was a loyal and generous comrade whose contribution to the club should not be underestimated.

Danny’s passing (aged just 64) will be of greatest loss to his wife Catherine, son Dermot, daughter Emma, daughter-in-law Emily and beloved grandchildren Adam, Luke and Sadie. Heartfelt condolences are extended to them and the wider family on their sad loss. Danny was laid to rest after Requiem Mass in Queen of Peace church, Coosan. May he rest in eternal peace.