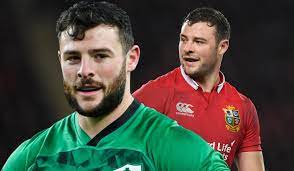 ROBBIE HENSHAW has been named in the 2021 British & Irish Lions squad that will take on world champions South Africa next July. Henshaw is one of eight Ireland players included in the 37 man squad with his good friend and former Connacht teammate Bundee Aki being the real surprise ‘bolter’. Conor Murray is the third Irish back while five Ireland forwards — Tadhg Furlong, Iain Henderson, Andrew Porter, Jack Conan and Tadhg Beirne — will make the trip.

This will be Robbie’s second Lions tour, the Leinster star having played in the series draw with the All Blacks in New Zealand four years ago when he was Lion number 824. Then the Athlonian’s appearances were hampered by injury and Henshaw will be hopeful of test appearances this time round. On current form he looks a sure starter against the Springboks whose physicality will pose a massive challenge (as will the altitude for a number of games) for the tourists. It will be interesting if he renews his centre partnership with Aki in any of the key fixtures; the duo were highly impressive in Ireland’s recent victory over England.

The 27 year old Coosan native has played 52 times for Ireland scoring 8 tries in his already award laden career. Everyone at Buccaneers are thrilled and filled with pride with this latest honour for the unassuming classy player who still keeps in regular contact with his home club.

Due to the Covid-19 pandemic, this will be an even more challenging series than ever. His musical prowess could prove invaluable in whatever downtime the players may have! We wish Robbie a very successful tour and have no doubt that he will relish and be well able for the challenges in South Africa.

Bundee Aki becomes Connacht’s fourth Lion, one of his predecessors being Ray McLoughlin who toured in both 1966 and 1971. Ray also played with Athlone although not at the same time as when he was capped by the Lions.