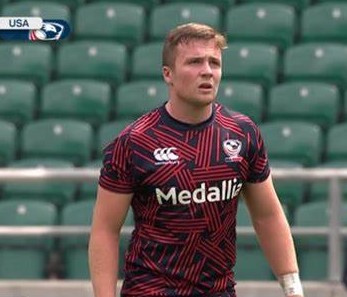 While England won 43-29, Luke Carty can reflect positively on a memorable Independence Day as the young Athlonian put in a fine performance for the USA Eagles at Twickenham on Sunday. Carty opened the scoring with a splendid penalty to give the American side an early lead but some poor defending by his teammates helped the hosts to a healthy 26-3 halftime advantage.

However, the Eagles put in a spirited and much better organised second half display that yielded four tries, three of which Carty converted to bring his points tally to nine on the day. USA outscored England 26-14 in that second period with Carty playing for the full match.
It was a massive step up for the Barrymore man, who was still playing with Buccaneers last season, but he looked composed and busy throughout. His performance will have instilled further confidence and self-belief in his play and it will be highly interesting to see how he fares against Ireland on Saturday night.

It would be even more intriguing if brother Jack was his direct opponent at the Aviva Stadium (kick off 7.15 p.m.) but the Carty family and all at Buccaneers are mightily proud of Luke’s rapid progress since he departed Connacht.