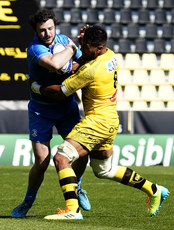 Leinster failed to build on a bright start, including a Tadhg Furlong try, to make a disappointing exit from the Champions Cup when they were defeated 32-23 by La Rochelle in their semi-final played in France on Sunday. The four times winners did not capitalise sufficiently on the possession and territory they enjoyed in the opening half-hour against the hosts who were contesting their first semi-final.

The French club gradually imposed their physical superiority on the proceedings and the penalty count steadily swung in their favour. Leinster led 13-12 at half-time and a knock-on ruined an early second half try opportunity that would have given them some breathing space. Thereafter they found La Rochelle’s power and defensive nous too much to handle and Leinster will regret a surprisingly flat performance by most of their players.

In hindsight Leinster’s dominance in the PRO14, where they face too many below par outfits, does not really prepare them for the heavy hitters from France or England that they are likely to meet in the crunch stages of tournaments such as the Champions Cup.

La Rochelle lie second in the Top 14 behind Toulouse, whom they will square up to in the Champions Cup final, have made wonderful progress in recent seasons. Their departing Director of Rugby Jono Gibbes and his replacement and current Head Coach Ronan O’Gara (who would have surely savoured this victory) have shrewdly steered the club’s upward rise and they are now clearly a force to be reckoned with. The town on France’s western seaboard has a population of approximately 75,000 (similar in size to Galway) which makes the club’s success all the more impressive.